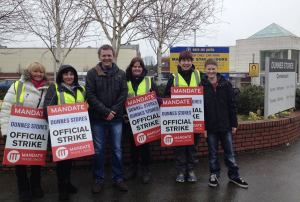 People Before Profit have said that they fully support the Dunnes workers in their fight for job and income security and the right to Trade Union representation. Today around 6,000 Dunnes workers will be out on the picket line today on a one day strike in 109 Dunnes stores around the country.People Before Profit spokes person and general election candidate, Counsellor Bríd Smith, has expressed her support for the striking workers.

“I not only support decency for Dunnes workers, I would demand it. All these workers want is job and income security and the right to have trade union representation. The company has blamed the workers for this strike action but it is purely the fault of the company, Dunnes, for not engaging with the workers.

“These workers are just ordinary people who cannot plan their lives properly because they are unable to predict what their income will be beyond 15 hours a week. I would challenge senior management of Dunnes to try to live under these conditions.

“I commend the Dunnes workers for taking this decision to stand up for their rights as workers. They are taking their stand to improve their working conditions but this is very important because it is a broader message against zero-hours contracts and neo-liberalism.

“Dunnes need to realise that workers are the most important part of any business, they are an asset to the company and must be treated properly. I would like to reiterate my support for decency for Dunnes workers and I won’t pass the picket.”