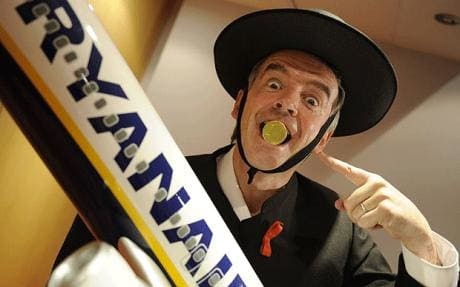 Fine Gael ministers held a fund raising dinner in the Shelbourne Hotel where big legal and accountancy companies shelled out €550 a table to allow their representatives to run shoulders with government Ministers.

But after a few drinks the blueshirts let their hair down and listened Michael O Leary, boss of Ryanair, stake out his claim to be Ireland’s Donald Trump.

O’Leary launched a stinging attack on unions and dreamt up a few fantasies about evil forces out to wreck business people.

RTE was a ‘North Korean union shop;’ Gardai who strike should be ‘sacked’; busworkers should be sacked; Dublin City Council was nonsensical in pandering to cyclists’;

‘Trotskyists’ were all over the new s reports. And on and on this right wing lunatic went.

But here is the thing. This nasty, privileged millionaire was introduced to the gathering by none other than the Minister of Finance, Michael Noonan, who described him as “Ireland’s leading altogether decent person”.

Sitting in the audience were three other government Ministers who made no objection to O’Leary’s tirade of abuse – Leo Varadkar, Richard Bruton and Simon Coveney.

According to the Irish Independent, there was ‘sustained applause and laughter from the 200-strong audience at the behind-closed-doors invite-only event’

Fine Gael’s only excuse for encouraging O Leary’s hate speech is that he will be speaking at another fundraiser for Fianna Fail in November!

These two right wing parties see him as their hero because he can get away with saying things they only mention in private.

We really need a country where people like O’Leary are marginalised and have no access to the corridors of power. That means building up a strong left party like People Before Profit.

If O’Leary makes you feel sick and you want to fight back against these corporate bully boys, then text JOIN to People Before Profit.