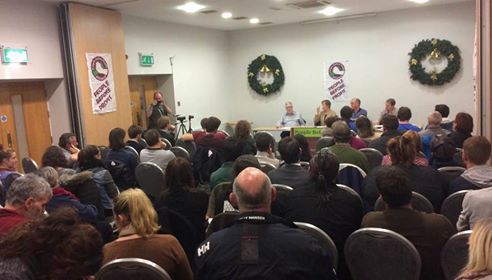 Cork People Before Profit recently hosted a very successful Public Meeting on “The Need to Legalize Medicinal Cannabis”
People Before Profit are 100% in support of the national campaign to bring in legislation in the Dail to make it available for those who have a medical need.
About 60 people came to the Maldron Hotel to hear speakers Vera Twomey, mother of Ava who suffers from Dravet’s Syndrome, Tom Curran whose late partner Marie Fleming suffered from Multiple Sclerosis and Gino Kenny TD for People Before Profit, who spoke on the bill for legalization that he has introduced in the Dail, and which recently passed its first stage unopposed.
All speakers highlighted both the academic and empirical evidence now available, which shows the fantastic relief and benefits of cannabis compared to  opiate based drugs which are dangerous and very expensive.
Vera Twomey spoke of how Ava’s health, appetite and social interactions have all improved in leaps and bounds since she started using it. However because it is illegal, it is difficult to obtain and carries potentially heavy legal penalties if the law is enforced, a ridiculous situation which should not be allowed to continue.
Vera decided to raise awareness on the issue by starting a walk from her home to Dublin. She was overwhelmed by the amount of public support she received and forced Health minister Simon Harris to engage and promise his support.
Tom Curran spoke of his own personal experiences and how he used cannabis to help his partner, the late Marie Fleming. Tom also and gave a technical and legal overview of the campaign.
PBP TD Gino Kenny spoke of his involvement in the campaign, and the hope that the herb and the products that include it will be accessible to all people who need it.
Concern was raised that it would only be available on prescription, which could mean having to buy expensive versions of the drug from a pharmaceutical industry whose only interest is in profit.
Others from the audience spoke passionately how cannabis had provided very effective relief, but also of the fear and frustration associated with prosecution.
Possession for medicinal use is a criminal offence; one person spoke of how they had received a jail sentence for possession for their own use and now could not find a job because of their record.
The campaign goes on, and the spirit shown by people like Vera shows that it is one that we can and will win if we unite in this effort!

Future meetings are planned around the country, the next People Before Profit public meeting in the Cork with the same line-up of speakers will take place in the Castle Hotel, Macroom on Tues. January 10th at 8pm.